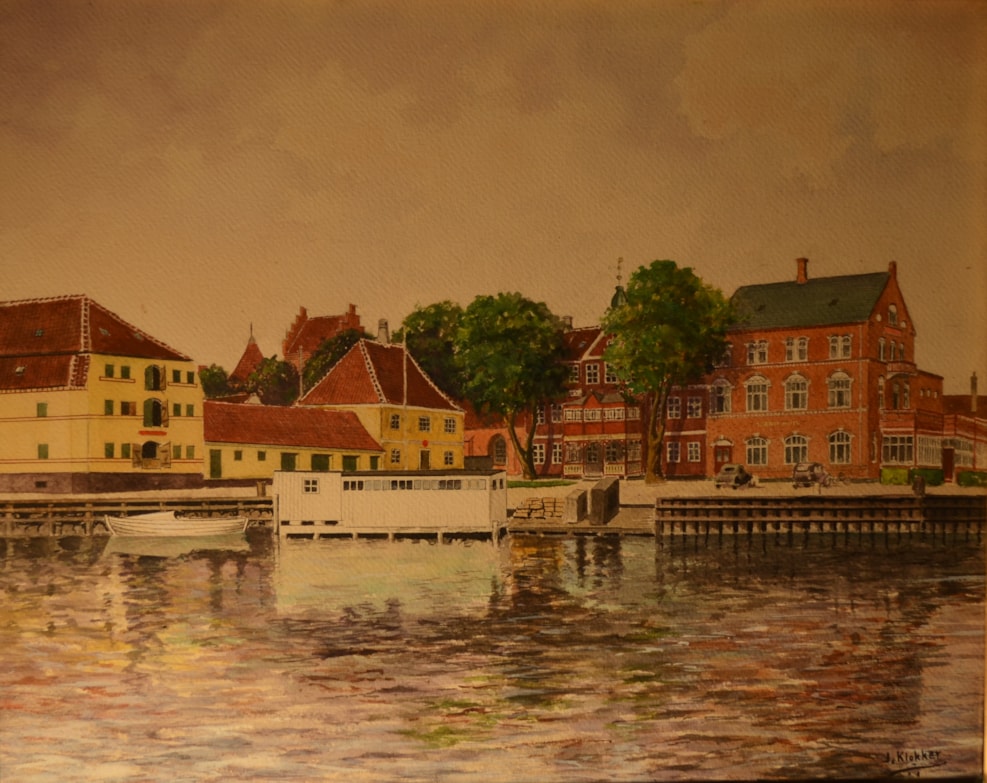 When Kerteminde was granted its royal borough privileges by Erik of Pomerania in 1413, the harbour played a central role in the growth of the town. It soon attracted a large number of merchants, who brought goods in and out by sea. The crowning glory of the town’s development came in the 16th and 17th century, when it became a harbour town for Odense.

The town’s heyday coincided with the period in Danish history known as the Renaissance. In a description of Denmark from 1656, Kerteminde is mentioned as a harbour town, “from which an incredible amount of grain and other goods are exported, both by its own townspeople, as their own food and trading at sea, and by citizens of Odense, who import and export their goods”.

The Renaissance harbour was at the centre of all this vibrant trading activity, even though it actually only covered a very small area, i.e. the section of fjord inlet located in a line from the two fish restaurants on either side of the harbour and up to Langebro.

When the railway finally came to the town in 1900, the construction of the railway bridge severed the connection from the inner harbour to the open sea, making it accessible to smaller vessels only. Its main facilities had to be moved out along the northern and southern quays.

Buildings around the harbour

For the merchants, who were the urban aristocracy of that time, a location near the harbour was definitely the most attractive. So the sites at the harbour and in the surrounding area, where the merchants built their trading houses, were in high demand.

Several of them are still there to this day and bear witness to the town’s heyday. Strandgade 3 was built in around 1590 by the merchant Niels Baker. For two centuries, it was the only brick-built building (apart from the church) in Kerteminde, and it later served as the town’s customs house for a great many years.

In the square opposite, there were two merchant’s houses, also owned by a couple of merchants from Odense. Despite undergoing a great deal of remodelling and conversion, one has survived and today forms the heart of the old part of Tornøes Hotel.

Two properties were built slightly further away from the harbour, and later became part of Andresen’s merchant’s house. The oldest part, with a gable end on Langegade, dates right back to the 16th century. The storehouse which faces onto Sønderstræde is from 1640. During the war a few years later, it was seized by the Swedes and has since been known as “Svenskemagasinet” (the Swedish storehouse). From the 1880s, and a hundred years on, the entire complex was owned by the Andresen family, which gave its name to the merchant’s house.

The old harbour was still the town’s lifeblood in the 19th century, and from this period is the yellow warehouse on Paludan Müllers Plads, which once belonged to the town’s major trading company, Elias B. Muus A/S.

The artists and the harbour

Kerteminde’s location on the bay and fjord offers much in the way of artistic motifs, and for 200 years, a succession of landscape artists have depicted the town and its surroundings.

Christoffer Faber was one of the first generation of professional artists in the town. In the 1820s, he painted one of Kerteminde’s old traditions, the boat race in the harbour. With the church, the future customs house and the hotel in the background, you can see the two boats, each one with a sailor dressed in white trying to push his opponent into the water.

After construction of the railway bridge in 1900, the old harbour died a death, as only dinghies were able to pass under the two bridges unhindered. Johannes Larsen’s watercolour from the 1940s shows a section of the old Renaissance harbour and the large warehouse from 1853, belonging to Elias B. Muus.

For most of the 1900s, the old harbour area remained as it had for centuries. Here, Johannes Klokker, who worked both as a painter by trade and as an artist, has depicted the idyllic harbour area with the hotel behind the old horse chestnut trees, the church, the customs house and the warehouses. In the foreground stands a fishmongers with its slipway.