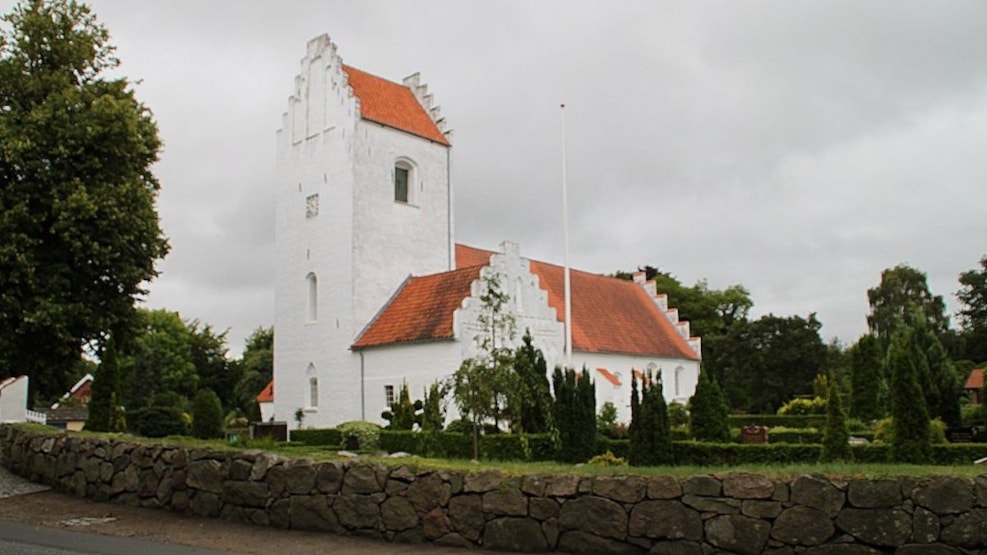 The present sengonian monk stone building is from the early 1500, but some roman plinths reveals, that there probably has been an older church the same place. And it is nearby to guess that it has been built in the Danish church building time in the 12. century.

Moving towards the church, you get closer to the porch, the entrance pointing south, which gable is provided with north Funen blindings, squares and stair windows.

Over the sandstone font is the church ship “Anna”, a three mast full rigged ship from about 1930, build by the ”Illemose Tailor” Anders Madsen from Rynkeby. Whose ships are known for highly artless style. The ship hung in the churches tower room in the 1930´s. Thereafter the ship laid on the church loft for a long time, from where it was brought to its current location in the porch.

The choir is a so-called long house with a course arch, which around 1590 was higher than the ship, but at present time is level.

The beautiful altarpiece from 1592 is a considerable amount of work in high renaissance, which got restored in 1912. It is a written altarpiece with quotes from the Bible in the squares.

In the choirs east wall, there is on each side of the altar there are two counterpart tombs representing Hans Stigsen (Ulfeldt) and his wife Anne Friis from Vejrupgaard. They died respectively in the years of 1546 and 1536. Further 4, strongly worn out, among those 2 representing priests from the 16. century, is put in the choir walls.

Opposite the parsonage, on the other side of the road, is the former tenant farm located, which operated the land owned by the church. And on the same side of the rod, west to the church, is the “the old school” located, it is a thatched timber-framed house, which at present time functions as a parish community centre, sexton office and candidate for confirmation school.