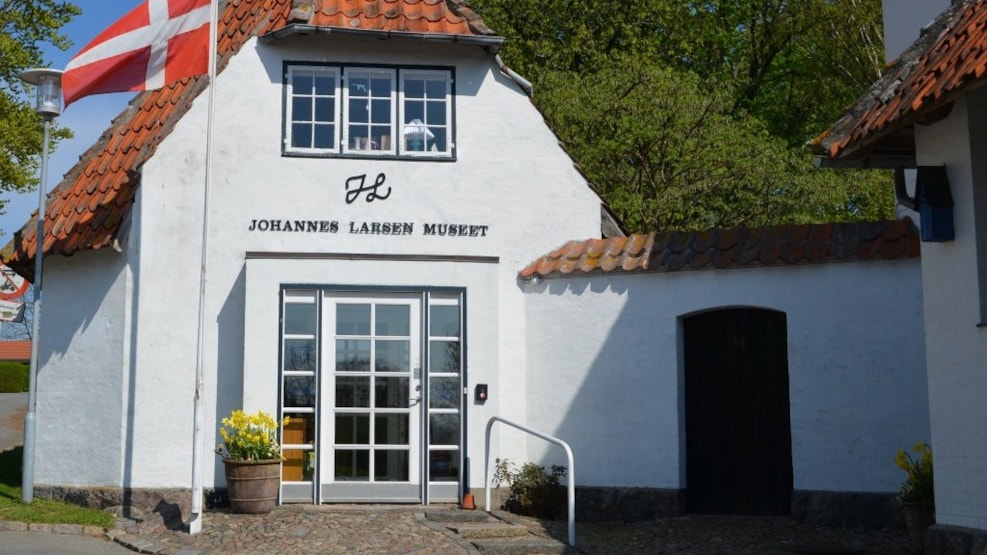 The Johannes Larsen Museum at Møllebakken in Kerteminde offers more than just an artistic experience of a special quality. The museum is also a fascinating historical architectural environment with the artist´s home in the center, surrounded by more recent buildings of great architectural interest.

Johannes Larsen was the most prominent member of the Fyn School of Painters. The Fyn School was largely formed in Kerteminde – “the most beautiful little town in the world” as Johannes liked to describe the town where he was brought up.

But not only did Johannes and his wife live in Kerteminde, so did Anna and Fritz Syberg, you can visit Sybergland just outside the city, which got its name from Fritz Syberg. From time to time, Christine and Sigurd Swane also lived here. Together they formed a colony of artist which acted as a magnet in attracting other artist and writers to Kerteminde.

The magnetism still works today, as can be seen from a visit to the museum, which portrays the themes of the artistic life of the area up to present day.

A visit to the artists’ home.
Johannes Larsen´s home, is the museum. It has down-to-earth art, which is tied to the sensory impressions and everyday beauty one encounters. Johannes Larsen Museum can, in itself, be classified as one big painting, because of the breathtaking views and the peaceful serene atmosphere.

The villa on Møllebakken was built by the newlywed artist couple in the first years of the 20th century. Of the two, it was Johannes who ran with most fame, but do not let that fool you. Alhed was likewise an excellent painter who had floral motifs as her favorite genre. The couple´s home is today untouched with furniture and other fixtures – and naturally, a plethora of art on the walls.

In the early 1990s, a large number of leading cultural personalities of the time – painters, writers, architects, and many others enjoyed the hospitality of the artist couple.

A garden chock full of charming buildings.
The “Workshop” is an extension of the house, where Johannes and Alhed each had their studio. On the southside of the building is a luxuriant conservatory, which houses a multitude of plants.

The old mill also belongs to the museum, as Johannes Larsen owned it. From here there is a superb view over the North Beach and the Great Belt. Next to the windmill you find the old mill house, where visitors today can eat packed lunches.

The display at the museum includes a total of more than 50 artists, who are represented in the 15 rooms, organised by themes.