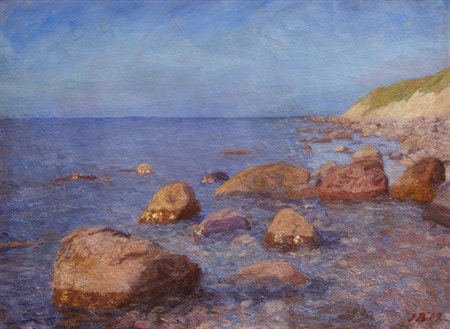 Jens Birkholm was a close friend of the Syberg family and one of the artists who visited them in Funen’s Head. He also accompanied Anna and Fritz on extended art stays to Italy in 1905. Birkholm was from Faaborg, just like Syberg, there he initiated his painting career. He was self-taught and regarder himself as a student of the “Fynbomalere” (paintors from Funen), to whom he also formed a close friendship with, especially with 7 year old, Fritz Syberg.

Birkholm is best known for its portrayals of people from the bottom of society, for example, from the poor farms of Faaborg. These motives may have affected Syberg, as his mother ended her life here.

Jens Birkholm spent the summer of 1909 on Funen’s head at the Syberg family’s small guest cabin, here he and Syberg painted 12-14 paintings with motives of the coast, the beach and the sea. This painting is one of those, and depicts the large stones at the water’s edge and the characteristic cliff of Bakkeland on the background.

Water, stones and cliff are still largely similar to themselves, of course the stones have moved a little over the past 100 years, but the sight is almost the same. The artist depicted here the meeting between water and stone. The large heavy stones stand like islands in the shallow water and, along with the rocky bottom, give reddish shades to the water, which gradually disappears and is replaced by blue, as we move out into the deeper water.

Jens Birkholm controls our experience of the view by allowing our gaze to go from the largest stone in the left foreground of the painting over the next stone in the water and finally to the characteristic cliff at Bakkeland, where the rocky waterfront ends. With its yellow sandy slopes and grassy top, the scenery stands today almost just as it did when Birkholm painted it over 100 years ago.